Jyväskylä’s own Yläkaupungin Yö is a city festival which opens the festival season of Central Finland in May. It takes place in the uptown area, near the university, and offers a wide range of events suitable for all ages. The festival begins on Saturday morning with family programme and continues versatile throughout the night until Sunday. The proximity of the venues and the abundant overlapping supply of performances guarantee the public loads to choose from depending on personal interests.

Yläkaupungin Yö is characterized by a spontaneous atmosphere that fits well the bohemian air of the area. The music from the outdoor events and the movement of thousands of buzzing people from one spot to the other creates a carnival-like atmosphere that invites people to join in. Spending time with friends and family is also a good way to enjoy the festival.

All festival events are free of charge. The venues are within walking distance from each other and the area is easily reached by public transport.

Do you want to perform at our festival? Just fill out this form and we’ll be in touch. As a ”free entry”-festival, we only pay the expenses for our performers.

JOIN US AS A VOLUNTEER!

Do you want to be a part of the people who make things happen? Are you interested in working in events? Now you can join our team as a volunteer, just fill the application form and find yourself working at the best event of this spring!

Volunteers at Yläkaupungin Yö can work in many kinds of tasks and we will try to find a task that suites just for you! Volunteers work for example at customer service, stage management, photography and final cleaning. If you are interested in work in task with more responsibility there is also possibility to work as a team leader.

You can find more information about the tasks here.

During the festival we provide lunch for volunteers, there is also a break room where you can relax and have a coffee/tea and some snacks during the day.

From volunteers we require 18 years of age and happy attitude! Fill out the application here!

APPLY TO OUR MARKETPLACE!

Do you have a great organization/company which just needs to get more visible? Do you happen to sell Arts & Crafts or something else? Are you interested in bringing your restaurant to our festival? If you answered ”yes” you might be interested in having a spot in our marketplace. We have places outdoors and also indoors. We bring the people so you only have to worry about your own spot!

Application to the food marketplace here!

The aim of the festival is to offer the public an easily accessible, spontaneous and versatile cultural experience. The festival programme includes dancing, theatre, movies, performances, lectures, visual arts, live music, literature, workshops, children’s programme, games and exercise. The performers are a mixture of professional artists and amateurs of various fields. There are also numerous non-governmental organizations, associations and societies showcasing their ideology and causes at the festival. All performers perform for free.

One of the key goals of Yläkaupungin Yö is to further the meeting of different cultures and publics. During the festival it is possible to see a rock concert in a museum or perhaps a theatre performance in the woods. The aim is to lure people into new kinds of experiences. Immigrants are also invited to present their culture at the festival.

In addition, there are activities in which the audiences can participate at the festival. You may find yourself building your own instrument, learning new dances, pimping up your clothes or trying parkour. Educational standpoint is important while planning the programme.

The programme is completed by the beginning of April.

The festival is organized by Yläkaupungin Yö ry, founded in 1992, accompanied by local cultural organizations and many of the restaurants of the uptown area.

Yläkaupungin Yö ry. employs a festival manager and a producer. They are in charge of putting the programme together and coordinating the festival. In addition, there are interns who join the production team from different schools. A big group of volunteers is also needed during the festival. They help in security, customer service, stage management, sound and lighting, transport, catering, video and photography and as roadies. 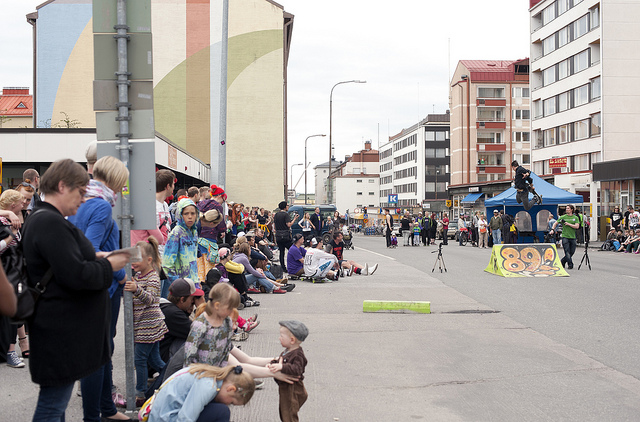 Yläkaupungin Yö aims to provide a unique showcasing arena for Central Finland’s cultural professionals and amateurs, organizations and institutions. For a budding artist the festival offers performance experience in front of a large audience, for a professional a chance to “let loose” with different kinds of material or in an exceptional venue. Non-profit associations get also noticed during festival. Most of the hundreds of performers come from the Jyväskylä region, as do most of the spectators. The festival could be described as an annual review of the arts and cultural expertise of Central Finland.

The festival gathers around 20 000 visitors to the uptown area. They use different services, e.g. restaurants, accommodations and taxies, not to mention the services the market vendors offer at the venues and other services provided by the city of Jyväskylä. Many participating restaurants reach sales heights on the day of the festival, as do museums and galleries in the amount of visitors. 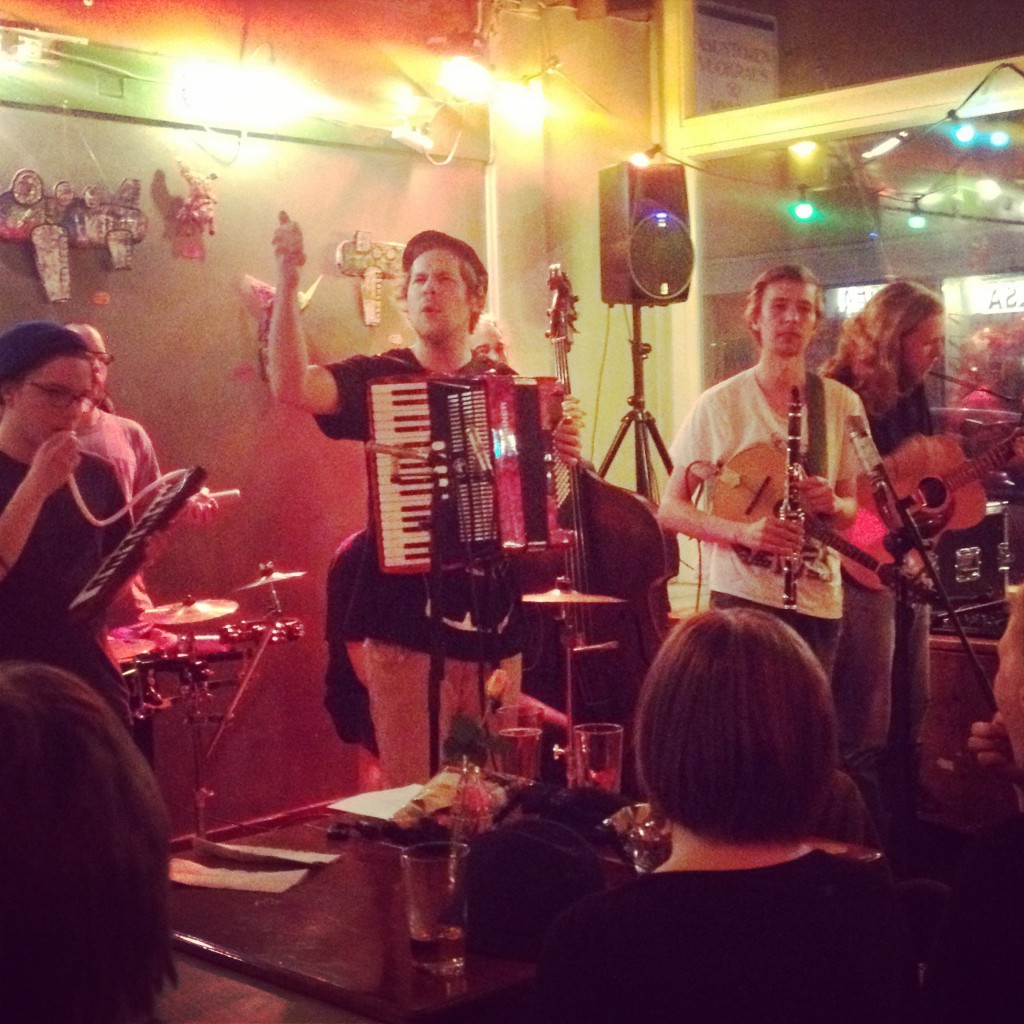 Älylän Ehtoo is a one-night club event which showcases versatilely what Yläkaupungin Yö has to offer as a festival. Live music, recitation, stand up -comedy or theatre, to name a few. Proceeds are used to fund Yläkaupungin Yö festival.

Älylän Ehtoo is organized twice a year: once in the spring and once in the autumn. Venues have included the following bars in the uptown area: Vakiopaine, Ylä-Ruth, Sohwi and Ilokivi. Only one ticket is needed to access all venues. 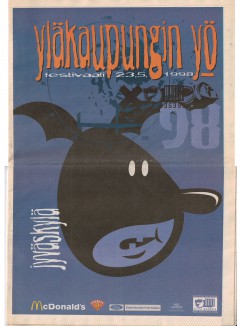 The beginning of the 1990’s was a bleak period of time in Finland. Banks went under, businesses fell, many people crumbled under their debts or after losing their jobs. This manifested in a dour way also in Jyväskylä. Bankrupt businesses turned into flea markets where financially strained citizens sold their belongings, and in the suburbs restaurants were turned into topless-joints. Everything was for sale, money market led the way and people were dragged along with it. The depression strangled people with a harsh grip but it also forced them into action. Tension needed to be released and the newly unemployed had time for hobbies. So they turned to creativity. As a result, making art in your own terms and the demand of cultural services strongly increased.

It was at this time that Yläkaupungin Yö was born. The idea was to create an open, volunteer-based city event that would be filled with interesting programme. Being free of charge it would also allow everyone to enjoy it. The person who came up with it was a young, poor student and active arts enthusiast Soili Puranen (now Elisa Pesonen). She brought the idea to a meeting of the Subcommittee for Cultural Affairs of the Student Union of the University of Jyväskylä early in 1992. In the end, it proved to be an easy task to convince all the Jyrock-veterans and other cultural geeks of her idea, because the organizing wouldn’t cost a penny and Puranen herself could act as producer.

The event was quickly named Yläkaupungin Yö (which loosely translates into Uptown Night). Almost all culture-affiliated locations in the Seminaarinmäki area agreed to participate; these included museums and galleries, restaurants and cafés, university units, Writers’ House.. In addition, artists were willing to perform for free. The first festival included performances by such acts as Seminaarinmäen mieslaulajat, band Miljoonasade under the pseudonym Penis From Heaven, writer-director Juha Hurme, sculptor Kimmo Schroderus and dozens of other professional and amateur artists. An event like this seemed to be in high demand in depression-time Finland. 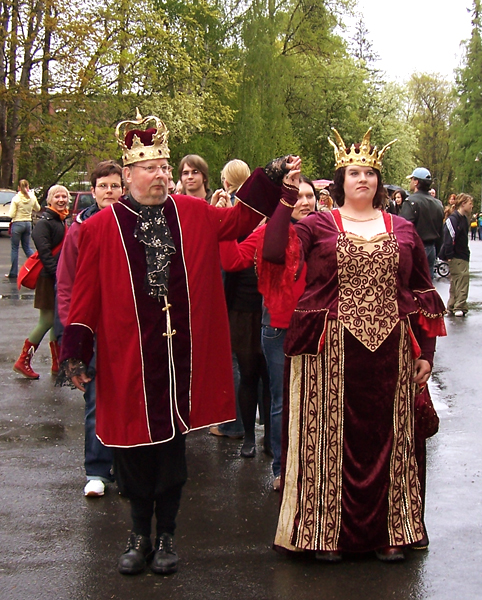 On April 25th producer Puranen and the secretary of cultural affairs of the student union Markus Latvala made final festival preparations at the student house. They were nervous. Would the people of Jyväskylä find this new event? Had the marketing that relied on a few posters and photocopied programme leaflets succeeded? Would this springtime Saturday evening turn out to be magically beautiful or cold and dark? As the night began to fall more and more people started to gather from downtown to Seminaarinmäki. Soon the cultural secretary’s phone rang for the first time at the student house: there were no more programme leaflets at the Craftmuseum. Could somebody bring more? From that moment on the photocopier was on steady use until the wee hours of the morning. The following day’s Keskisuomalainen had a headline: Yläkaupungin Yö turned out to be a cultural sensation.

Yläkaupungin Yö ry was found the same spring and it has been the organizer of the festival since 1993. It was then that the festival was re-scheduled to be held in May. In 1994 the organizers took a year off to ponder about the future of the festival. There was discussion in the board whether it should continue as an annual event or not. The feedback from the public, performers and the partners was pretty much the same as it’s been in the 2010’s: Yläkaupungin Yö is an anticipated springtime event that opens the festival season in Central Finland. It brings the citizens together to a communal village fest where they can enjoy the richness of local culture. Needless to say, it’s been an annual event ever since.
PAR

We are searching for partners for whom we can offer reciprocal partnership and visibility at Yläkaupungin Yö and in its programme and pr-material. You are warmly welcome to consider different ideas with us!

This year’s festival programme will be published on our website, in our magazine and in social media in April. Last year our website had over 14 000 visitors. Our program magazine (4-colour tabloid) has an edition of 10 000 copies which is spread to dozens of places in Central Finland and in the major university cities of Finland. The magazine is divided into theme pages so it is possible to be shown in context of a certain area of art or subculture.

It is also possible to increase our partners’ visibility by adding them into our posters, flyers, venues and program. 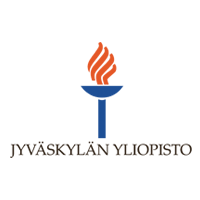